My new book, LETTERS (working title–coming March 2016), is about…wait…can you guess? Yup, that’s right—it’s about letters. Lots and lots of letters. In the book, mom of three and first grade teacher, Natalie wrote letters to her husband during her battle against an aggressive cancer. She arranged to have them delivered, one per day, after she passed away. Her husband, Luke, uses the letters for guidance and comfort. That is, until she starts mentioning a mystery man and a secret she doesn’t have the courage to reveal before her passing. Then the letters make him question everything he thought he knew about his wife, their marriage and the family they’d built together.

Recently I had my own real life letter (er…email). This one wasn’t from a long lost loved one, it was from the past **insert spooky music here**. When I say “past” I don’t mean ancient history or even from my childhood (which is almost ancient history). This letter was from a year ago.

Back then WRECKAGE was out on submission and I was waiting “patiently” to find out if any editor out there saw enough in my little story to want to publish it. I’d just started writing LETTERS, but was suffering from a lot of self-doubt. Now here is where I insert a little note for any non-writers out there. Self-doubt is one of those things just about every writer I’ve ever met struggles with, I swear. In some ways I feel like self-doubt is one of those things that keeps a creative person honest with their own work and makes them continually want to improve. Then again, it can also be absolutely crippling. 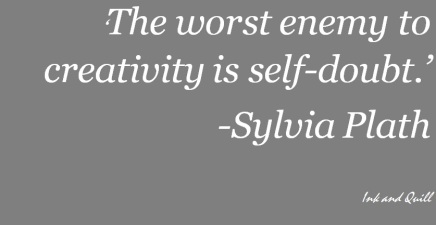 So, back to one year ago. I think I’d just gotten my first rejection, this one from a big publisher. The editor didn’t feel that the story had enough surprises in it and, very politely, took a pass. Of course all of my greatest fears and insecurities came bubbling up. At that moment, I was very tempted to let all the negative thoughts I’d been fending off take up residence in the part of my brain I use to write. Maybe I really wasn’t good enough. Maybe this was just a silly dream and one day my agent would wake up and realize the huge mistake she’d made taking chance on me. Then I stopped mid-freakout and made a choice—I’d write a letter to future me, more specifically I’d write a letter to one-year-in-the-future me.

I was well aware of the changes life can bring in one year. In fact, when I started thinking about it, one-year-in-the-past Emily hadn’t even planned on querying the finished manuscript saved on her desktop and here I was with an agent and a manuscript submitted to publishers I never imagined would even glance at my story.

I sat down and wrote to 2015 Emily. I told her where I was as a writer and hopeful debut author, how I was writing a new story even though it was hard, how waiting to hear back from publishers was harder than querying ever was. Then I wished future-me the best, that I was still writing, still pursuing my passion and finding new ways to balance all the areas of my life. Then I asked myself to take a moment to note of all the successes in the past year, to acknowledge the difference a year can make so that next time maybe I wouldn’t get so discouraged so quickly. I sent the email using FutureMe.org.

I just got that letter a few weeks ago. It was a great reminder of how much can happen in 365 days. This year has been a spectacular one for me professionally and it was so fun getting that letter and being able to tally the great things that 2014 Emily never could’ve imagined happening. After reading and pondering those things I quickly wrote 2016 Emily an email giving another update and asking future me to reflect, once again, on the difference a year can make. I look forward to reading that email next year and can only hope it brings me as much happiness as this one did.

So, let’s face it, not every year is going to be stunning. This was a banner year for me, but there are good years and there are knock-your-feet-out-from-under-you years. A good writer friend of mine wrote a FutureMe letter at the same time as me. In the past year she’s faced some major struggles in her personal life and I am continually moved by her resilience and strength. But when this dear friend got her letter it wasn’t a moment of victory as much as it was a reminder of a time before her trials. Her letter from the past ended up illustrating all the things she’d lost. Like I said before—one year can make a big difference. Unfortunately, sometimes it’s not a good difference. But honestly I think that’s okay.

I’ve had those years where you look back and think, “How did I get here?” In those years you are as unsure of your future as you were certain of it just a few months earlier. Those are scary, dark moments. But the delivery of my letter from last-year reminded me that there is always hope. Even if this year smacked you upside the skull and left you with stars circling your head, next year can be better. So, if you’ve had a crappy year or if you’ve had a great year, I challenge you to take a minute and write a letter to future-you. You can write whatever you like, but I suggest you at least cover: what’s going on in your life right now (good, bad and ugly) and your hopes/dreams and goals for the next 12 months. Then send that sucker off into the inter-webs to be stored for the next 365 1/4 days. I hope you forget about it a little so one year from today you get a little ding and open your inbox to find a letter from your past.