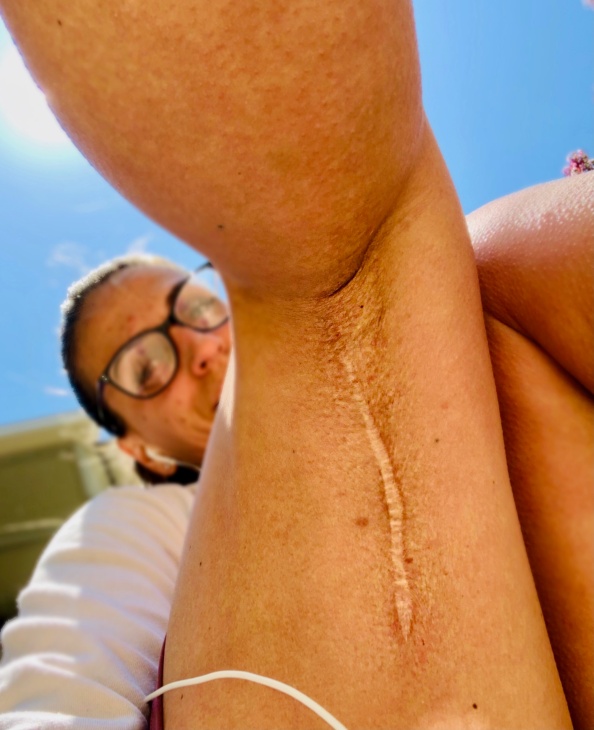 (I wrote this article a year ago right before the pandemic hit. Because of the chaos of that time–it was never published so I wanted to share it today on the 15yr anniversary of this life-saving moment)

The man who saved my life died today.

I’m sure he died without even knowing of his heroism. After all, it wasn’t a grand moment or even one that he’d likely have remembered easily. It didn’t happen in the back of an ambulance or at the end of a gun and it definitely didn’t happen when he was flying in the air or wearing spandex.

When Dr. Shea saved my life, I was twenty-five years old sitting by myself in the communal waiting room of Loyola’s Neurology department, my nursing bra cutting into my achingly full breasts. My ten-week-old son was at home over an hour away with my mom and his eighteen-month-old brother. He hated taking a bottle almost as much as I hated pumping and when I’d gone in for my pre-appointment MRI a few weeks earlier, my mom said he’d screamed the whole time I was gone. I was sure he was giving an ear puncturing grand encore at that exact moment. I shifted my bra strap, wishing I could join him.

A nurse called my name from a door to the left of the humongous desk where I’d checked in. This interaction had been more than two years in the making. It started with a barely noticeable lump on the back of my right thigh, right above my knee joint. At first, I thought I’d pulled a muscle. I rubbed it out after a workout and didn’t notice the swelling again until after the birth of my first son.

After losing my pregnancy weight, the swelling was back, but this time bigger. Between the slow-moving HMO referral system and relocating over fifty miles away from my long term primary care physician—it took eight months to get a scan. The results came in at the same time as my positive pregnancy test. The MRI warned that the mass on the back of my leg might be cancer. The pregnancy test told me that now my body was not only carrying something that might be able to kill me, but it was also growing my second child.

A visit to a specialist during my pregnancy landed me with a diagnosis of a benign nerve tumor. I was told I’d have to grit my teeth and bear the pain of the tumor pushing on my sciatic nerve during my pregnancy, and then get a referral and scans and neurosurgeon as soon as possible after giving birth. I was nearly three months post-partum and even though I’d been able to endure the pains of childbirth without medication, the pain of the tumor was growing unbearable. And that is why I was here instead of at home putting my toddler down for a nap and holding my baby.

The nurse escorted me to an exam room where I went through all the routine steps that had to happen before an appointment. I was weighed, gave my family history, answered all the basic questions with very basic answer. After a short wait my doctor walked in, and I started into my story. As I spoke his face fell. He stopped me almost immediately.

“I’m sorry, Mrs. Bleeker, but I’m not the right doctor for you,” he said, closing my file that apparently no one had looked at ahead of time. My story barely started, caught in my throat.

“But, I waited a month to see you,” I said, tears pushing at the back of my eyes. Do not cry, I ordered myself fighting frustration and hormones.

“I’m a neurologist. I treat neurological conditions. You need a neurosurgeon. That’s not my specialty,” he explained. He was kind, understanding, but when he put my file down, I knew it was over. He was telling me to go home.

“You can go back to your primary care physician and get a referral for a neurosurgeon,” he said, slowly like it had been my mistake that I’d been scheduled incorrectly.

He apologized again but didn’t seem to know how to help the crying woman in his office. He stood to leave and passed me a box of tissues.

“Take as much time as you need to…collect yourself,” he said, holding my file in front of him like a shield. He walked out the door.

Spoiler: That was not the man who saved my life.

I sat there, alone and devastated, but also so unaware of any other option than to just leave and do it all over again in…who knows how long. Another visit to my primary care doctor to get another referral to an in-network specialist to get another referral to an out of network specialist at Loyola who would likely take a month’s wait (at least) to see. Not to mention the unseen stressors of finding someone to watch my boys, making sure my baby ate while I was gone, the financial burden of each and every doctor’s visit, and the desire to sit back and enjoy being a mom finally.

I swabbed up my face, collected my things, snuck out the exam room door, and then ditched out into the lobby without talking to any of the staff. I still had to pay my copay (for NOT seeing a doctor), so I stopped by the front desk, hoping that it wasn’t obvious I’d been crying (or that my milk-laden boobs were about to explode).

The woman at the desk was friendly, but as soon as I gave her my name, she stopped fussing with the paperwork on her desk and looked right at me instead.

“Hold on right there. Don’t leave,” she said, patting my arm and picking up the phone receiver off her desk where she had a brief conversation before looking back at me.

“I’ll call them right now. Don’t you worry.” A nurse stepped out of the door on the opposite side of the desk from where I’d seen the other doctor. She didn’t even call my name, she just wiggled her finger at me, and I went.

It was a reasonably standard exam. I wish I could say something particularly fantastical happened when Dr. Shea, an experienced, award-winning neurosurgeon, and professor, walked into the room and ran through a million questions about my symptoms and life. But–he was an unassuming, friendly, middle-aged doctor who seemed to know what he was doing. After a few questions and tests, he looked through my scans and then scheduled me for surgery early the next week.

“It looks like a benign nerve tumor, and you are so young, but it’s always better to be careful in these instances,” he said, leaving me to fill out paperwork. And then he was off to his other, actually scheduled patients.

I had surgery six days later. I knew it would be a difficult one with a nearly twelve-inch incision that uncovered the whole nerve in my thigh. I knew there was a chance that another nerve would need to be grafted from the back of my left calf. I knew I’d miss my best friend’s wedding and that I’d have to figure out how to deal with nighttime feedings and a busy one-year-old. But I didn’t know a lot of other things.

Like, I didn’t know Dr. Shea would be the voice on the phone telling me the tumor was not, in fact, a “beautiful nerve tumor” as we’d once thought but “something else” that still needed testing. I didn’t know why he got very quiet when I brought my three-month-old with me to my follow up appointment. I didn’t know he was figuring out how to tell me that the tumor was, in fact, a soft tissue sarcoma. I didn’t know he’d be the person standing beside me as the words sunk in, and I realized that I had cancer.

Dr. Shea didn’t treat my cancer. He made sure I found the right doctors, but he never knew that “nerve tumor” ended up being an aggressive form of soft tissue sarcoma. And he never knew that the oncologist told me I’d gotten that mass out “just in time.” And I’m sure he had no idea that if that mass had been .5 cm bigger the chances of metastasis would’ve skyrocketed, and my chances of survival would’ve plummeted. He probably never knew that he saved my life. But he did.

Fifteen years later, I’m still cancer-free. I have four children, I run on my “bum leg” almost every day, and after my conflict with cancer taught me to never take life for granted I went after my dream of being a writer, and now I’m on the verge of publishing my fifth novel.

Dr. Shea not only saved my life—he changed it.

I never knew my doctor personally. I’m sure his family could speak to the man he was far better than I can. And I’m sure he has countless stories of saving lives as a physician and passing that gift on as a teacher. But what lingers with me after hearing of the end of a life seemingly well-lived is that singular moment of choosing to care and then acting when he didn’t have to.

I will never hold a scalpel in my hand. I will never understand human anatomy or the intricacies of the nervous system (or the even more intricate workings of the modern insurance system apparently). I will never have the skill or opportunity to extend someone’s mortal existence. But to me the true miracle moment of my cancer story isn’t medical–it is human, and it is easily replicable by every one of us. It is that magical thing that happens in the pause between choosing to help or choosing to do nothing. We sit in that space often, and sometimes we bridge it like when we decided to text that friend who has been struggling, or take an extra kid home during our carpool or giving a real compliment or saying thank you to someone who probably doesn’t hear it enough.

I won’t lie; these opportunities aren’t all lifesavers. But many can be life changers, and that is an awesome power we possess that goes beyond schooling, or training or even spandex costumes and well-sculpted hair. And when done right, you likely won’t even know that you’ve—made someone’s day, lifted someone’s burden, changed someone’s mood—or even saved someone’s life.

The man who saved my life died today.