If you haven’t heard my news already then get ready to put on your happy face! My women’s fiction, FRAGMENTS, has been picked up by Lake Union Publishing and will be published in February of 2015! Lake Union is an imprint of Amazon Publishing and here is the link to their web site because I know you all want to check them out and see how cool they are: http://www.apub.com/imprint-detail?imprint=13

If you would like to read the whole story then pull up a chair. I couldn’t talk about it for almost six weeks so now I’m ready to spill.

So lets start at the beginning. Well, maybe not the beginning. Let’s start the day after I signed with my super agent, Marlene Stringer (http://www.stringerlit.com) back in February. We spend two months getting FRAGMENTS ready to be submitted to publishers. This included some editing and a lot of changes to the title (I think we went through 20 or 30 possibilities before settling on FRAGMENTS which I LOVE). There were a few other timing issues in there but the submission packet was finally ready by the second week in April and went out to a hand full of editors for a first round of submissions.

I can be a pretty patient person (when I try very very hard). When the kids flushed a rock the size of my fist down the toilet, I learned how to remove the toilet and reinstall it as well as what a “wax ring” does in that whole situation. But waiting to hear back from editors was a kind of nervousness I’ve never really experienced before. There was no googling a diagram of this situation so I could learn how to fix it. All I could DO was wait.

After three weeks Marlene emailed me to say that one of the publishers had “shown interest” and she’d update the other publishers. Then there was more waiting…and a lot of  questioning everything I’d ever written. It took a little while for me to stop obsessing about submissions and start focusing that nervous energy on my new project. Once I started writing my new WIP I almost forgot how nervous I was about everything else.

Nearly five weeks later I received the email I’d been dreaming about. I was at scout camp with my boys doing fun stuff like this: 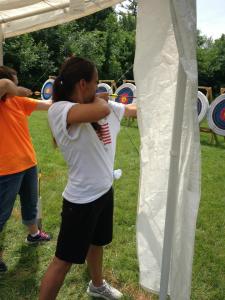 I’d stopped checking my email obsessively two weeks earlier so it wasn’t until some time after lunch that I happened to glance at my email. My heart jumped. It was an email from Marlene with a subject line of: Need to speak–news

I didn’t want to jump to conclusions, completely aware that news is just as often bad as it is good, but when we finally got in touch Marlene told me that I had an offer from Lake Union Publishing!! We had a few other details to go over but before we hung up Marlene said something that will stick with me forever. She said, “Emily, you know what this means don’t you? This means you are going to be a published author.”

So, while Marlene worked out some of the details of the deal I was a good little author and kept my mouth shut. It took five weeks to get a deal finalized but now I can yell it from the rooftops! It’s super liberating but more than anything I’m ready to get to work. It will be a busy few months but with the guidance of an amazing editor and a team of professionals from Amazon I know we are going to put out a the best book possible and I’m so excited to share it with you all!